skip to main | skip to sidebar

Help me out a little here, please...

Good morning! Am I dreaming or wasn't there a post about Riley at the top of this page?! I am wondering if I am missing something on my computer?! Do I need Amy to come back over to help?!

Love the new picture at the top, but do you think this is the road Riley has disappeared on?

I hope everyone has a fabulously fun Halloween! We will be trick-or-treating as one scary evil looking dude tonight and it looks like the weather is going to cooperate so Joey doesn't look like another kid just bundled up in a big winter coat!! Vince and I also have bowling league AFTER the trick-or-treating has finished and are bowling against two couples we know pretty well so THAT should be a fun way to cap off the evening!

Vince took the day off today and is driving down to Milwaukee to help Nick fix his car. Then, Nick and Meaghan are coming back to Sun Prairie for the weekend. Josh has to work and is actually looking forward to having his place all to himself (since all his roommates are coming back home to party on State Street tonight.)

Things here in Sun Prairie are going along just fine, in case you wanted to know. Joey is busy with fourth grade extra schoolwork, and is bowling on two leagues, taking piano lessons and also in band learning the clarinet. He is loving, loving, LOVING his new baby brother, Koda, and I must say the feelings seem quite mutual!!

Nick and Meaghan both have jobs now as tutors for UW-M and they travel to different places to help kids with their homework. Nick sets up "shop" at a clinic for underprivileged families and he is in one of the waiting rooms and helps kids that are sitting there with their moms or dads while their siblings might be seen by a doctor. He teaches them to read and works about 10-12 hours a week. Meaghan goes to a YMCA and helps out kids with Reading and Math. This was her first week, and her stories about traveling there by bus were QUITE intense. She has now teamed up with another UW-M student, Sarah, and they are going to drive over in Sarah's car from now on. I am going to pay for Sarah's gas I'm so grateful!! Anyway, they work Mondays and Wednesdays from 4-7pm plus they all get paid for travel time too, which is nice.

Josh is still at the pizza place and getting used to their system. We stopped in there last weekend when we were there for some carry-out pizza and it was very, very good. We noticed a plaque that said Mama Mia's placed 3rd in some poll about favorite pizza or Italian in the Milwaukee area. It is such a little hole in the wall, we were quite surprised!! Well, that was until we ATE the pizza...then we understood just fine!!

Well, I am looking forward to everyone's Halloween pictures that they post over the weekend! My little Winnie-the-Pooh has now turned into some scary looking creature with a ghoulish blue face with warts all over it, long scraggly hair and a weapon that could chop down an entire forest in 10 seconds! I'm not sure how much candy one gets with something like that, but if nothing else, he can scare the littler kids out of THEIR candy! :)

Have a frightfully safe night! 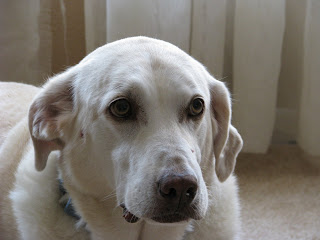 It is with a heavy heart and tear-filled eyes that we say goodbye to our Reggie White. Reggie first came to us from an animal rescue place because his previous owner had thrown him from a car, abandoned. I have never been able to figure out why anyone would have done that to such a sweet dog. He has been the best damn dog anyone could ask for.

When we first got him, he was gentle and playful with the girls. Audrey used to put her hand in his mouth, and he would never bite down. That is why she knew when Noah was born that he would be safe with Reggie. That dog put up with a lot -- Sometimes he played the part of a horse, or he would be your pillow while you watched TV. He would never growl, bark or bite if someone tugged at his tail or ears. Not only did he welcome newborn Noah and all that toddlerhood brought, but when we adopted 2 kittens, he daddied them like the gentle soul that he was. He would lick them clean, let them lay on him to take naps, and even let them eat his food.

Then when Maggie arrived, all bubbly and ready to play, he took care of her too. He showed her how to run as fast as you possibly could from one end of the house to the other, then turn around and run back. You didn't have to have a reason, sometimes it just felt good to run. He took good care of Maggie too, cleaning her, playing with her, and snuggling with her. She is a little lost without him right now. Yesterday when I tied her up to go potty, she just sat at the door waiting patiently for me to let her in --- it was Reggie's job to bark and let us know they were done "doing their business."

He loved to play catch. I would say fetch, but in his younger years, sometimes he would just catch the frisbee or tennis ball and keep going. There are frisbees and tennis balls all over DeForest, hidden by Reggie. We met many a neighbor when they called asking if we had lost a white dog. All commented on how well behaved he was and many offered to adopt him. He loved to swim in the lake and go camping with us. I always felt safer knowing he was on watch. He loved to be close to us. He would follow you all around the house, and whenever you stopped, he lay down at your feet -- sometimes behind you, so if you weren't careful, you'd end up on your nose when you turned around.

Unfortunately, after 13 1/2 years he was ready to take his final nap. He did that with love and grace also. The look in his eyes and the final wag of his tail said it all, "I've loved you all, and this has been fun, but I'm so very tired." No matter how long you know it's coming or how prepared you think you are, it breaks your heart to have to say goodbye. We will miss Reggie terribly. There will never be another dog like him, but we thank God for blessing us with him. 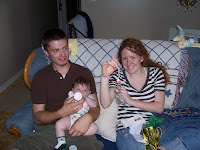 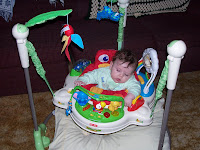 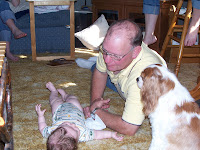 First off Carissa awesome job on the pillows and curtains, we enjoyed the show and the story. Next, we had our Oct B-Day gathering and Bon Voyage to Brian. Chris and I have B-Days and Brian is leaving on the 20th for China. He gets back Nov. 6th the beginning of Christmas season. We gave him Ashlynns first ornament as a token of what a great Christmas a baby brings. We all know Christmas through the eyes of a child is the best and most unforgettable feeling. I also got the coolest present. I got a rainforest to play with with Ashlynn, Wow how much fun we will have. We gave Chris all kind of goodies to enjoy like Coffee, pumpkin pecan bread, gourmet cheese and crackers and a funny card to make him laugh. I also got a book about Tim Russert who passed away this year and was my political encyclopedia. I will read with coffee on the deck and enjoy fall with the laughs and warmth he inspired in people every day. The Irish Catholic boy from Buffalo will live in the hearts of many and hopefully the world will be better for what we learned from Tim and Big Russ his Dad. We had Turkey Dinner carryouts from St. Pats and it was very low key, little work and very wonerful Birthday memory. The rainforest picture was actually taken this morning before Ashlynns nap, so it is already being enjoyed.
I hope everyone made great use of the wonderful weekend weather and soaked up the warmth to save for the coolness that will come soon. Enjoy your week and enjoy life! Make one person feel better this week and you will feel even better yourself.

Posted by Julie at 9:04 AM 2 endearing comments 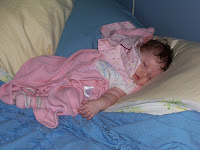 Good fall Saturday morning. I just heard a commercial on TV this morning about Extreme Home Makeover. The Richland Center Family show is being aired on Sunday Oct. 12th, that is this Sunday for anyone who has lost track of time with this awesome weather. Carissa helped with the window treatments and pillows for this house. I believe she said she worked on Ty's special room so it should get some good air time. Kelly get out the Kleenex and popcorn and get the couch ready for the best yet Extreme Home Makeover. Carissa feel free to correct me or add a new post with anymore FYI about the show. Must see TV for me this weekend. We are washing windows today and enjoying every minute of the warmth. My wish for you all this weekend is to do something fun and enjoy where you live and what it has to offer. Julie
P.S.Pic: I was folding laundry and Ashlynn was helping.

Posted by Julie at 9:08 AM 1 endearing comments

If you have a question you would like to "Ask the Audience", please feel free to send us an e-mail.

E-mail doucette56@charter.net or Dawn at dawndoucette@charter.net and we'd be happy to post whatever it is you'd like to know!

Lots of Love to Everybody!

The Latest Trends in Fashion Jewelry!

If you have started your own blog and would like to add it to our list, just let us know! Send us an e-mail with your blog's web address and we'll happily share it with the family! dawndoucette@charter.net or doucette56@charter.net